Where in the world is Doris?

Where in the world is Doris Mager, our intrepid leader...This weekend she'll be at Village Creek State Park 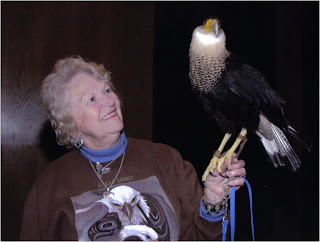 http://www.tpwd.state.tx.us/spdest/findadest/parks/village_creek/
near Lumberton and the following weekend, she'll be conducting presentations at
Martin Dies, Jr. State Park
http://www.tpwd.state.tx.us/spdest/findadest/parks/martin_dies_jr/
near Jasper. If you need more information call Doris at 828-506-8106. If you get a chance, check out this Living Legend!

s.o.a.r.south@hotmail.com
website: www.soarsouth.org
Posted by Wings to Soar at 5:51 AM No comments: 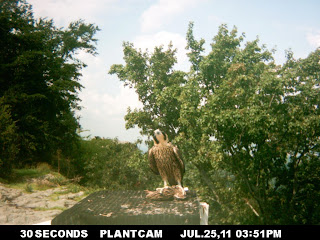 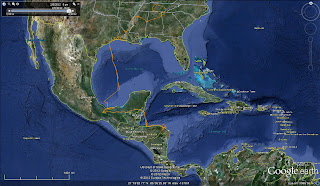 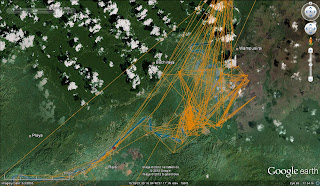 We are sorry we haven't updated this blog for the last few days. We were waiting to see if we would get more data from Lookout, but it didn't happen. The last readings we got from Lookout were on February 12th. We noticed in the information that accompanies the readings shows that from February 9th through February 12th, there was only one reading per day and it was coming from the same spot. We also checked other data and we were seeing a battery drain signal. We contacted Microwave Telemetry, who built the transmitter, and asked them to look over the data. They came back with the news that Lookout was either on the ground (presumed to be dead) or that he had somehow gotten the backpack/transmitter off and it had fallen to the ground. Being the optimists that we are, we are hoping for the latter and not the former. Is this the end of the line for Lookout? It is really hard to tell. Other than mounting an all out search of the Rio Patuca area from which his last signal emanated, we won't really know. He is banded with a Federal leg band and who knows, he may show up back in the Chattanooga are in a few years as a nesting bird. It is hard to think about this remarkable bird being gone. Maybe he is not...whatever the outcome, it has been an incredible journey.

We have included three images in this post (click on any to enlarge). One is his last location on Rio Patuca, one is his overall flight path form July 11, 2011 to February 9, 2012 and one is of Lookout standing on a quail at the hack box at Rock City (taken by Jeff Raabe of Rock City). We thank Rock City for their support of this project (and we will release more birds this year through our cooperative effort) and the Benwood Foundation for the grant that allowed us to conduct this telemetry study. We thank you all for following the posts since Lookout and Chatty were released. Please continue to check back to see what is going on with S.O.A.R. and what upcoming programs and projects we have. Godspeed Lookout!

Posted by Wings to Soar at 5:09 AM No comments: 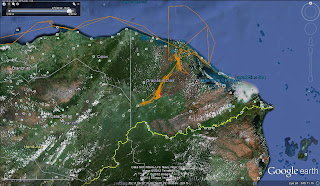 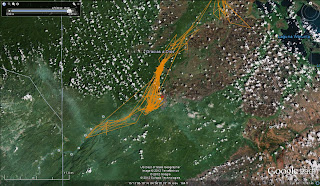 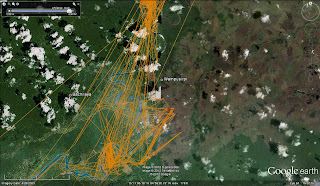 Here is the latest information of the whereabouts of Lookout, the Peregrine Falcon. The red dot indicates where he was at 1:00 on February 6, 2012. He is still in Honduras on Rio Patuca. You may click on any image to enlarge. We expect him to start moving north in the next few weeks.

Meanwhile, where is Doris Mager, our fearless leader this week and in the next few weeks? This weekend, she'll be at Brazos Bend State Park http://www.tpwd.state.tx.us/spdest/findadest/parks/brazos_bend/
and the following weekend February 18-19th she'll be at Village Creek State Park http://www.tpwd.state.tx.us/spdest/findadest/parks/village_creek/
If you want more info, give Doris a call at 828-506-8106

Meanwhile, Dale and John will be doing a program on Thursday February 9th in Patterson, Louisiana at the Patterson Civic Center http://www.pattersonareaciviccenter.com/ for a program at 6:00 p.m. CST. This is in conjunction with the Cajun Coast and Convention Bureau's Eagle Festival http://www.cajuncoast.com/public/events/eagleexpo/

Thanks for dropping by and maybe we will see you on the road...

p.s. we are booking programs for the Spring. If you are intersted contact us at the e-mail address or phone number listed.
Posted by Wings to Soar at 7:44 AM No comments: