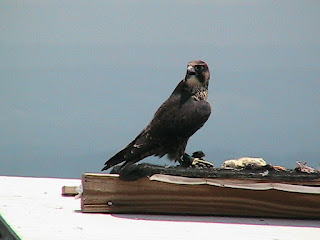 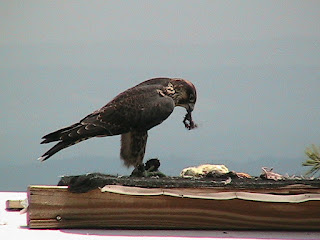 Fourscore is doing great! He is still returning to the hack station to feed. These photos were taken on 6/29/12 at 2:00 p.m. He had just returned to the feeding platform after harassing a Turkey Vulture at approximately 1000 feet over the mountain. The air temperature on Lookout Mountain was around 101-102 degrees. We will continue to feed him everyday for the next week and then will start to wean him. Check back in to see how he is doing. Thanks!

Dale and John
s.o.a.r.south@hotmail.com
visit our website at www.soarsouth.org
Posted by Wings to Soar at 6:12 PM No comments:

Fourscore at the hack box 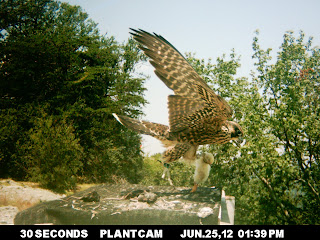 Fourscore, the Peregrine, continues to hang around the hack box area. He is starting to become more proficient at flying as he was observed making high speed passes near the box. Jeff Raabe of Rock City captured this photo (with a time lapse wildlife camera) of Fourscore leaving the hack platform with a chick we left for him to eat. Click on the photo to enlarge. Check back for updates. Thanks!

After a few days of not seeing Fourscore the Peregrine (he managed to remove his transmitter), we did see him today. Food was left on his release box yesterday afternoon and this morning, it was gone. This afternoon, we replenished his food and and as soon as he saw us near the hack box, he few close by for a look. He landed on a cliff ledge in front of Mr. Chapin's house. As soon as we cleared the area, Fourscore flew to the top of the hack box for his afternoon meal. We will continue to provide food for him until we know he is hunting on his own. We will keep you updated on his progress. 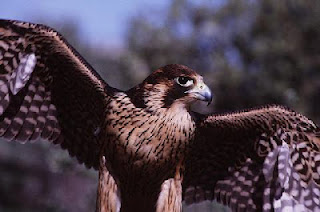 Posted by Wings to Soar at 5:24 PM No comments:

At 6:10 a.m. EDT today, the door to the release box was opened . At 6:18, the young Peregrine Falcon from the Dunwoody section of Atlanta, flew to his freedom. "Fourscore" as he was named from a winning entry on Rock City's Facebook page (this year is Rock City's 80th anniversary, so fourscore represents 80 years...a score being twenty years. He was also the 8th Peregrine released at the attraction), didn't waste too much time flying away and landed in a nearby tree. About 15 minutes later, he was spotted flying overhead and was accompanied by a small flock of Chimney Swifts. A transmitter was fitted to him before release and a telemetry search was conducted a few hours after release with no results. Where had he gone? Had he set his sights on Atlanta? Around 4:45 p.m., food was taken to the release box (two chicks) and a telemetry check was conducted with surprising results. He was nearby! After getting another reading from a different angle, he was spotted in a tree near Bill Chapin's house, near the hack box, and near the Seven States Flag Court (click on the tree photo to enlarge). He was watched  here for nearly two hours as he preened, stretched and observed the surrounding area. He later flew out briefly into the valley and then returned to another tree near Bill's house, but closer to the hack box. Perhaps he will find the food on top of the box and hopefully he will stay in the area for several weeks. We will keep you posted.

s.o.a.r.south@hotmail.com
visit our website at www.soarouth.org
Posted by Wings to Soar at 6:56 PM No comments: 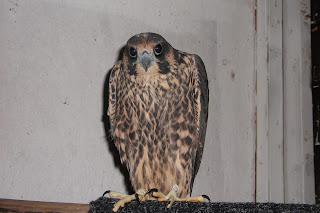 We have received an unexpected Peregrine Falcon for release this year. The breeder from whom we normally get birds for release produced no young this year. Our back up source already had his Peregrines committed to a release project in South Dakota. We had given up releasing Peregrine for 2012. On Thursday June 7th, we received a call from Jim Ozier of the Georgia Department of Natural Resources.  He had a Peregrine that he wanted to know if we could hack it at our Rock City release site. After talking it over with Andrew Kean and Jeff Raabe of Rock City, we decided that we could take the bird. Jim said that this Peregrine was from a nest in the Dunwoody section of metro Atlanta. The female and mother of the Peregrine is only two years old and is inexperience as a mother. The male, hatched in 2007 on the Sun Trust building in Atlanta, had to incubate the eggs (a task normally handled by the female) and had to hunt for the young once they hatched. The female apparently brooded the young, but when it came time for her to join her mate in providing food for the young, she did not. She only hunted for herself. The pair produced two young, both males, and their father kept them fed the best that he could. Once the youngsters got older, the father simply could not provide enough food. According to Greg Greer, who has participated in Peregrine Falcon release projects in the past, and had been observing the nest at the Manhattan Condos, the young fledged sooner that they should have, probably due to hunger. One of the youngsters flew into traffic and was killed. Greg marked the location of where the second male went, but couldn't find him until the next day. The Peregrine was taken to a rehab center for a few days and Greg delivered him to us on Friday and we have had him in our care. The bird, whom we are temporarily calling "Dunwoody" will be released on Monday, June 18th from our hack site on the other side of Bill Chapin's house at Rock City. Let hope his does well, but at least for now, he has gotten a second chance.

By the way, we are now in our 8th regular season of Rock City Raptors www.seerockcity.com with showtimes Thursday through Sunday 11, 1, and 3 p.m. EDT with an additional show at 4:30 on Saturday. Come on up and see us!

s.o.a.r.south@hotmail.com
visit our website: www.soarsouth.org
Posted by Wings to Soar at 4:19 PM No comments: