Hello,
Fourscore has not returned to the hack station to feed for several days now. Perhaps he is now hunting for his meals now. We will continue to provide a small amount of food for the next few days. To date, he has been the most visible Peregrine we have released. He stayed around the hack site for 3.5 weeks. We may see him again, either sometime in the next few weeks or maybe in a few years when he returns as an adult. Jeff Raabe of Rock City caught some  recent photos of Fourscore. We'll keep you posted. Thanks! 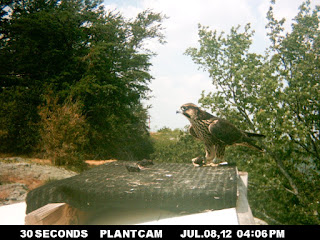 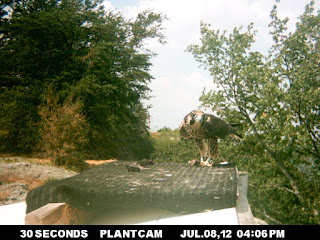 visit our website: www.soarsouth.org
Posted by Wings to Soar at 3:32 PM No comments: 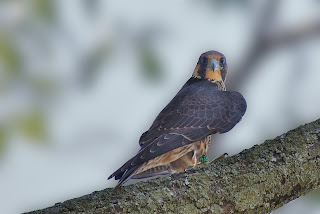 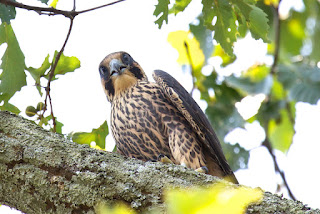 Fourscore, the "Atlanta" Falcon, continues to be seen around Rock City. On Thursday evening, he survived some 70+mph winds that were caused by a derecho http://www.spc.noaa.gov/misc/AbtDerechos/derechofacts.htm#types similar to the one that hit the Washington, D.C  area the previous week. We were concerned on Friday that he would not be around, but we were relieved when we saw him at the hack box. He has been seen by many visitors to Rock City www.seerockcity.com, especially around Lover's Leap and the Seven States Flags Court. We hope that he will stick around a little longer because it sure has been fun to watch him soar and dive! Thanks for following!

p.s. Thanks to Dianne Blankenbaker for these wonderful photos!!! (click on them to enlarge)
Posted by Wings to Soar at 5:06 AM No comments:

Fourscore is still around the hack site, but now is starting to venture out a little more. On a couple of occasions, he has been seen high about Rock City thermaling with other birds. Yesterday, he was observed actively chasing a Chimney Swift, but his chase took him out of view around the mountain, so it is unknown whether or not he caught it. He continues to come back to the hack site to feed and we are interested to see how long he will stay in the area. It has now been two weeks since he was released and the previous falcons have left the area after about two weeks. However, he was released three weeks earlier than any of the other falcons, so he may stay in the area a little longer. We will see.

W are now in the midst of our Rock City Raptors programs. Come up to the "Rock" and catch a show Thursday through Sunday 11, 1, 3 with an additional show on Saturdays at 4:30 p.m. EDT. Thanks for checking...

WEBSITE: www.soarsouth.org
Posted by Wings to Soar at 6:47 PM No comments: