It has been almost two weeks since Rocky was released. We have not located his transmitter signal in about 9 days. Last Tuesday, We searched for his signal from the air via an ultralight aircraft called a trike. We were able to get high enough to do a pretty broad sweep, but found nothing. We continue to do a daily search from the ground, but have failed to locate him. We have been putting food out on his hack box, but has yet to return to feed. Still, no signal is not a bad thing. He may have completely left the area. He is banded on both legs, so if he is spotted somewhere, he can be identified. Our main hope is that he survives to return to the area and comes back to set up a breeding territory. Time will tell...

By the way, Rocky has both Federal and Georgia State leg bands on him. The U.S. Fish and Fish and Wildlife Service (Federal) band is on his right leg. The number is: 816-35947. The Georgia
DNR bands are on the left leg and it is a two part black and green band. The black part has an "X" on it, while the lower green part has "65" on it.
Posted by Wings to Soar at 9:18 AM 1 comment: 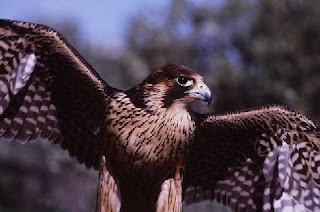 Yesterday morning, August 12th, Rocky the Peregrine Falcon was released. We opened the front of his release box before first light and by 6:25, he quickly left the hack box. He took us by surprise on how quickly he departed. He shot out of the box with very strong wingbeats and flew about 1/4 mile from the site and landed in some nearby trees. He stayed in that location throughout the day and was there before dusk. He was probably trying to figure where he was. We will continue to track his movements with radio telemetry. For more info on Rocky, go to: www.seerockcity.com/birds/rocky.htm We hope to see Rocky some before he begins his lifelong journey (as we will now provide food at his hack box in case he has difficulty hunting) and maybe we will see him in a few years around Lookout Mountain as a nesting bird.

John and Dale
Posted by Wings to Soar at 4:24 AM 2 comments: 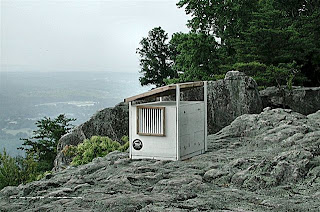 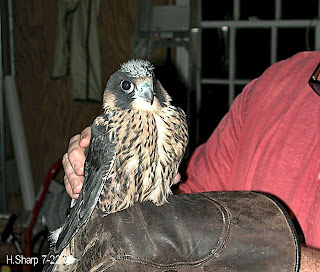 Hey,
Rock City Raptors continues through Labor Day, September 1, 2008 with shows Wednesday-Sunday at 11, 1, and 3 Eastern Time (an additional show on Saturday ay 4:30). We are in the middle of a Peregrine Falcon Hacking program. We currently have a male captive hatched Peregrine named "Rocky" in a hacking box located at Rock City. Rocky will be released on August 12th and it is hoped that he will return to the Lookout Mountain area in 2-3 years to nest. The general idea behind hacking is where a young bird of prey makes its first flight is the area it will return to nest. This technique has been used to restore many populations of raptors including Bald Eagles, Golden Eagles, Osprey and Peregrine Falcons. In the Chattanooga area, a male Peregrine Falcon named Roi established a nesting territory on a railroad bridge near the Chickamauga Dam. Roi was originally hacked from a release site at Cloudland Canyon State Park, near Trenton, Georgia in 1992. This release site is some 20 miles from the Dam nest site. He was there for many years and fledged a number of young with several different females, the last being Dreama. Unfortunately, last year, Roi was injured and ultimately died from his injuries at UT Vet School in Knoxville, Tennessee. Dreama was sighted around the nest site until around March of this year and then left, perhaps lured away by a new mate. We hope that Rocky or perhaps Garnet, a male released two years ago at Rock City, will return to continue the Peregrine breeding in this area. For more info about Rocky, and his journey, please go to: www.seerockcity.com/birds/rocky.htm .
Thanks!
John and Dale

p.s. We are booking program for the Fall-Spring now. Please call 706-657-3278 or e-mail us at s.o.a.r.south@hotmail.com
p.s.s. photos of Rocky and the hack box by Harold Sharp of the Riverwalk Bird Club. Thanks, Harold!
Posted by Wings to Soar at 7:33 AM No comments: