Lewis and Clark were released Monday morning. The hack box was opened at 5:55 a.m and by 6:20, both had left the box and headed around the corner to the south. A little over an hour later, I saw one of the falcons with its escorts of about five crows. Jeff Raabe of Rock City is going to set up a wildlife camera to see if he can get some photos of the falcons as they come back to the hack box for food. Maybe in a few years, one of the brothers will come back to the area to set up a nest territory! Thanks to Rock City for their continued support of this restoration project! Thanks to Ray Helman for coming out to document the release! 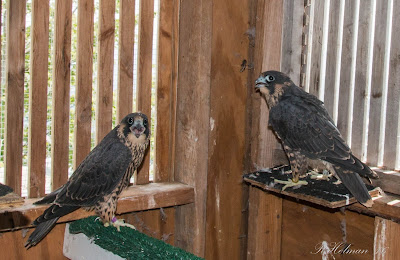 We have decided to wait until Monday, June 13th, to release the Peregrine Falcons. We placed US Fish and Wildlife Service leg bands on them this past Monday and checked their feather growth. The primary feathers (the main flight feathers) were not fully grown. They will be by next Monday and we expect them to fly away in fine fashion. We'll keep you updated on their progress.

Wings To Soar
s.o.a.r.south@hotmail.com
423-605-8917
be sure to view the Live Feed from the release box at: http://www.seerockcity.com/plan-your-visit/falcons We currently have two Peregrine Falcons in our hack box at Rock City. 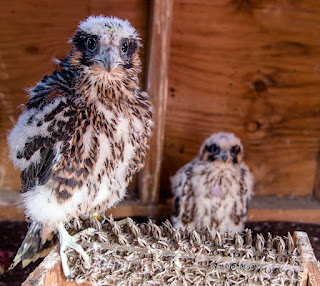 We received them last Friday, May 27th, from Andy Kramer of Hastings, Minnesota. Andy has supplied us with young Peregrines for our release project for several years. The two yet un-named brothers, are now 36 days old. We hope to release them next Wednesday, June 8th. The two will be numbers 11 and 12 falcons that we have released at the "Rock" in hopes to restore Peregrines in the Chattanooga/NW Georgia area. Rock City has a live feed video from the hack box, so one may view them if you wish. The video is delayed by about five seconds, so the images look rather robotic. To see the Live Feed go here:
http://www.seerockcity.com/plan-your-visit/falcons

Speaking of Rock City, we are now in our second week of our 12th season of Rock City Raptors. Showtimes are Friday-Sunday at 11:00, 1:00, 3:00 and 4:30 EST. Come on up to the cool mountaintop and see us at See Rock City. By the way, thanks to Ray Helman for the great photo!