Bonnie the Peregrine and Earth Dayz 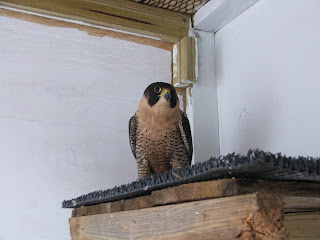 Hello Everyone,
We recently acquired a new bird. Her name is Bonnie and she is a Peregrine Falcon. She is of the anatum subspecies, which is the Peregrine that has been historically found in the continental U.S. This Peregrine subspecies was greatly impacted by DDT pesticide and by the early 1970's was nearly extirpated from the Lower 48 states. The Peregrine Fund http://www.peregrinefund.org/ was started by Dr. Tom Cade of Cornell University and several other falconers who decided to try to save the Anatum Peregrine Falcon through a captive breeding and release program. It has been a huge success and the Peregrine is now nesting again at many locations across the U.S. This species has been part of a small release program we have had a Rock City. Peregrines have nested in the Chattanooga area, but about three years ago, the male of the breeding pair was found injured and ultimately died. We hope to aid in the re-establishment of Peregrines in this area by releasing more of these speedy predators. This is one of the reasons we acquired Bonnie. She was donated to us by a Falconer named Christopher Lynn. He had her as a breeding bird and last year, she laid four eggs. Unfortunately, they were not fertile and not too long after this, someone broke into Chris' facility and released Bonnie's mate. Bonnie came from the Peregrine Fund which removed her out of a wild nest as a youngster. Nest site observers noticed that she seemed to have a problem with her left eye. Someone was sent to check her in the nest and sure enough, she had trauma to her eye and was removed. Her chances for her wild survival were very slim, since she would have been handicapped in her hunting ability. We will, at first, use Bonnie in our upcoming shows at Rock City. Hopefully, by the end of the summer, we will be able to find a mate for her and get them into a breeding situation. Stayed tuned...
On Friday, April 2nd, we will be at Rock City for their Second Annual Earth Dayz event http://www.seerockcity.com/pages/EarthDayz/ We will conduct our shows every weekend in April. To quote Kim Jackson, Rock City's Special Events Coordinator: "Earth Dayz (Fridays-Sundays in April, excluding 4/30)) will be a value add event for our Spring break guests that will include the Birds of Prey show at Critter Classroom (11am, 1pm & 3pm) , an artist-in-residence interactive sculpture experience outside the Pavilion and a hands-on recycling/planting activity at the Lovers Leap stage (11am-4pm). In addition to these free activities, the following activities will be available during the event (for an additional charge): RockQuest Adventure package, climbing wall, and panning for gems." Come on up and join us in April.
A quick note, we had a great time in Wabasha, Minnesota at the National Eagle Center's Soar with the Eagles Weekend http://www.nationaleaglecenter.org/ The folks had us doing programs in a school gymnasium (as opposed to an outdoor tent), the weather was nice, with temps on Sunday reaching 50 degrees (as opposed to -10 degrees two years ago). We had great attendance for our four presentations and the people at the NEC were wonderful. We hope they'll invite us back (hint, hint) for this event in the future. If you are in SE Minnesota, check out the Eagle Center and stop by Slippery's Bar, where part of the movie, Grumpy Old Men, was filmed.
We still have a few slots open for programs this spring (not too many). If you wish to schedule a program this Spring or for the Fall/Winter 2010-11 please call us at 706-657-3278 or e-mail us at s.o.a.r.south@hotmail.com Thanks!
Dale and John

Posted by Wings to Soar at 8:16 AM No comments: