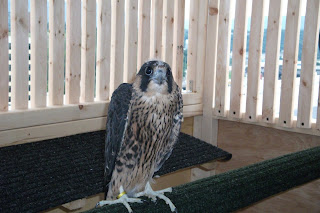 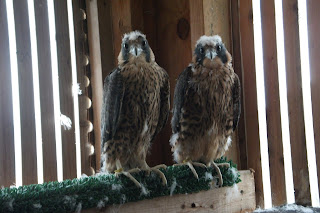 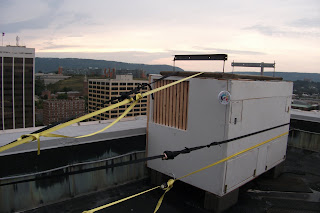 On Wednesday, June 22nd, we had three Peregrine Falcons arrived from Hastings, Minnesota. These were hatched in captivity by Andrew Kramer. The birds were around thirty fours days old. We acquired these birds for our cooperative Peregrine Falcon release project with Rock City http://www.seerockcity.com/ and additionally, a complementary release for downtown Chattanooga. Two of the three brothers went into the hack box at Rock City and the other to a release box atop the First Tennessee Bank building in downtown Chattanooga. The bird at the bank is being cared for by Jeff Boehm, an avid Chattanooga birder. All three will be held for about two weeks and at this point they will be fitting with radio transmitters (one at Rock City and the other at the FT Bank). One of the birds at Rock City will be fitted with a solar-powered satellite transmitter (purchased with a grant from the Benwood Foundation) and we should be able to track his movements anywhere in the world for several years. After a day, the birds will be liberated. We are looking forward to the release and we thank Rock City for its financial support for funding this project and our opportunity to release Peregrines again (our fourth release) and a Chattanooga businessman for his support as well. Stayed tuned.....

Dale and John
Posted by Wings to Soar at 4:16 AM 3 comments: